It's time to play catch up on the blog... currently the weather outside is cold and a slight drizzle has begun, signs of the impending end of the fire season for Zion Helitack. You may wonder if the ship is still here... the answer is yes! We are in a contract extension that looks like it will continue to the end of next week around the 12th of October. As I wait for word on a possible SAR in the park (lost party in the Subway), I though why not post some of what happened this season.

We started the year excited about the approval to gain Cargo Let Down as a tool for our program. It took a little bit of coordinating, but we finally got Jay Lusher (CLD Check Spotter from Grand Canyon) and Maria Mancano (AMD Check Pilot) to come spend a couple of days training the crew. Following are a couple of pictures of the training that took place. 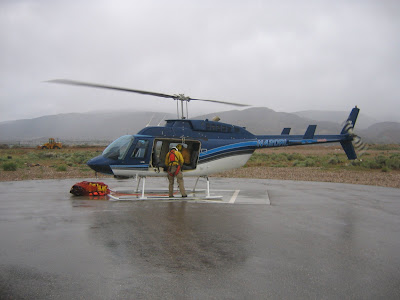 Of course the first thing that must be done is the rigging of the helicopter... for the rookies, that we are, this takes a little bit of time... and as you can see the blades are turning which adds to the stress of doing things efficiently and yet proper and safe. 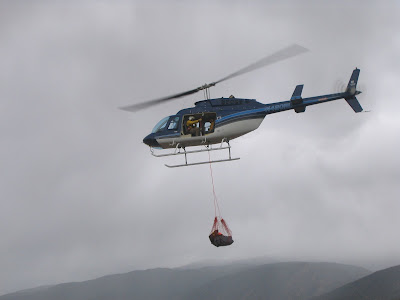 Following proper rigging there is a so called "song and dance" that occures over the intercom system, between the pilot and the spotter. During training both the Check Spotter and Check Pilot are also on board to help train the pilot and spotter in the proper verbage... following a short exchange the helicopter lifts... 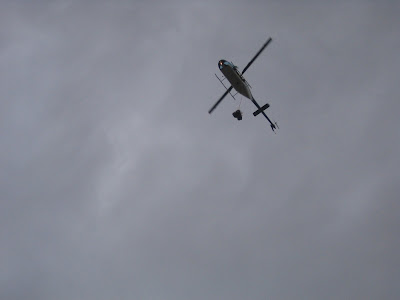 We elected to train in two methods of Cargo Let Down (CLD)... the 1st being shown here is an external CLD. This means that the cargo is rigged to the outside of the helicopter and flown in such manner until over the intended spot to receive the cargo. 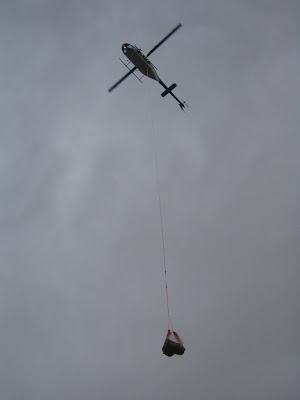 Once above the location that has been chosen by both pilot and spotter, the pilot manuevers through small adjustments and the direction of the spotter to fine tune the placement of the cargo. In an external load... the spotter prepares the load to be released, however it is the pilot that releases the load by triggering the belly hook. Once the load has been released from the belly hook, it is up to the spotter to control the decent of the cargo to the ground. Following the cargo reaching the ground the let down line is also thrown to the ground and the helicopter can fly away having succesfully delivered the cargo.

Another method that we trained with is that of doing internal cargo let down. This is where the cargo to be delivered is internal in the helicopter. 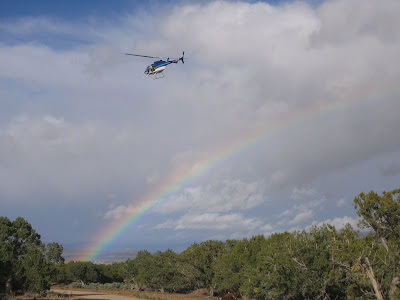 You can see in the picture above that the spotter is directing the pilot into place above the end of the rainbow... and there is no visible cargo hanging from the bottom of the helicopter. They are preparing to do internal cargo let down. 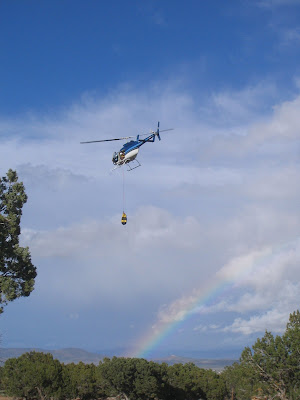 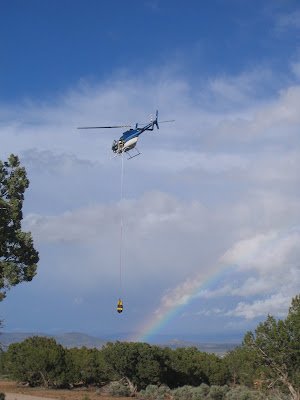 It looks as though the spotter has nearly reached the ground where the end of the rainbow sits... 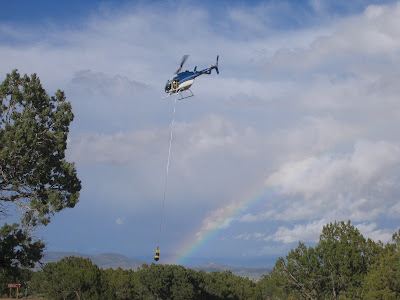 All in all... it was a lot of good training and we were given the thumbs up to use CLD as a tool for inserting cargo. It was a couple of years in the preparing and acquiring the go ahead to train for Cargo Let Down, so I am happy to say that Zion Helitack has successfully crossed another bridge in our journey...

This is the first time I have heard of CLD from a wildland fire helicopter. I would be interested in seeing photos of the hardware needed for the operation.

And what is the advantage of CLD vs. a traditional sling load?

Congrats on CLD. I am glad that you updated the web site just so I can still feel apart of the Zion Helitack Family.
Take care and tell everybody in the office I said HI.

Bill, wanted to respond and let you know that I will upload some photo's of the gear we use... primarily it is a special bracket that has been added to the helicopter, we clip into it with a rescue 8 w/ ears. The line is accordianed in a special trifold bag and attached to the floor. the tubular nylon is run from the bag to the figure 8... we drop the cargo then use the figure 8 as a friction device to control the decent... much like a rappel. I'll provide an additional post with pictures and more information soon.

As far as difference between long line and CLD... Cargo Let Down has a farther reaching capability for high vegatation... with up to 300' let downs. It allows the helicopter to fly into position in nearly a standard formation, and then fly away the same way... benefit is we can do multiple missions with CLD (i.e. rappel, GPS, recon, etc.)... the primary intent of CLD is to support rappel operations... lower rappelers then lower their cargo. CLD is not designed to take the place of long line, however in certain situations it has its advantages. One big drawback to CLD from that of long line... is weight restrictions. We typically don't lower anything over approximately 200-250 lbs. It is difficult to control the decent, not to mention nearly impossible to manhandle out of the door if you are doing an internal CLD evolution. So we are limited by weight... one hoop you can jump through is to split loads... meaning we have 400 lbs of gear to get the ground, we do 2 200 lb loads CLD. Again I will do another post in the next few days to update or further explain the process of Cargo Let Down.