Every year despite ongoing efforts, we lose lives to the fighting of wildfires. Some lives are lost to freak accidents that many say were unforeseeable, other lives are lost because of mistakes made... foreseeable and preventable if only we as a society could learn lessons from the past. We are supposed to be devoting our efforts as supervisors to ensuring the safety of those whom put their trust in us, both on and off the line. I think if you were to ask most any supervisor, he or she would tell you that they are doing their best. Doing their best to ensure that those young men and women that work for them are given the best training, the safest equipment, and the guidance that will keep them from becoming a fatality. My question is this... if we are doing our best, why do we continue to lose firefighters to mistakes made that could have been foreseen or prevented? Is our best good enough, and when do we know that we have reached our best? I don't know that I have the answers... I don't know if anyone has the answers. If the answers to those questions were obvious, then I'd like to think we would do something to change the future based on the past... I know that we are trying, but as the great Yoda once said,"Try not, do or do not. There is no try". Isn't that the truth? No such thing as trying... you either accomplish what you set out to do, or you fail... and don't get me wrong, failure isn't all that bad. As long as you learn from your failures, they can be looked upon as success. I should restate that... As long as we all learn from one another's failures, we can be successful.

Following any fatality, there is an investigation. Most investigations talk about the same old thing... here is what went wrong, and this is what was ignored from lessons previously learned. I agree that often in fatalities on the line it is easy to see causation... however, none of us have a crystal ball that will show us the results at the end of the path we choose to go down. However, we should not be making mistakes that someone else has already made... especially when such mistakes lead to lives being lost.

In 2006, on the Devils Den Fire, I lost a very good friend. Following the investigation, there were lessons to be learned... many of which were lessons that had been taught due to other fatality fires. I made the decision, following the summer of 2006, that I would no longer wait for someone else to do their part in teaching the next generation of firefighters how to be safe. I'm sure that some of you understand what I am talking about... If the district didn't organize a staff ride to visit a fatality fire, then my crew went without. I often times would take for granted that the course I just sent my crewmembers to, had all the essential information that they needed to learn about the subject and how to remain safe. This often went unchecked by me... I did not take the time to quiz my crewmembers about the things they should have gotten out of the course. If there is a lesson that I have gotten from the death of my friend, it is that I have the power and resources to teach the next generation of firefighters the lessons that they should learn. I don't presume to know it all... non of us really do! But what I do know will no longer be kept just in my minds vault, but will be shared with anyone who will take the time and interest to learn from me and those who have lost their lives.

Last season I took my crew to the site where my good friend lost his life... It was my first return to the location in nearly two years, and it was emotional. I know that both the new and seasoned crewmembers on my crew had some level of reservation about visiting the site... One thing about most firefighters is that we don't wish to be reminded of our mortality. However, I think that reminders of such mortality is important. 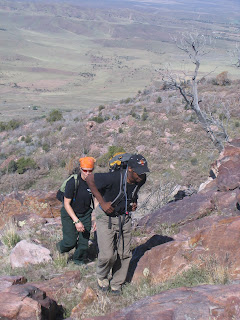 The climb to the fatality site overlook, at Devils Den, is no small feet. In this picture you can see that the crew is trekking their way up the steep and rocky slopes far above the valley floor. I think this difficult climb helped make visiting the site more impactful than it might have been. It also keeps the general public from making the trek. It is important to myself that those whom visit this site, really desire to do so... It is not a climb for the faint at heart, or those who are looking for a easy afternoon stroll... Only those looking to visit the site, with strong conviction to do so, will actually make it to the top. 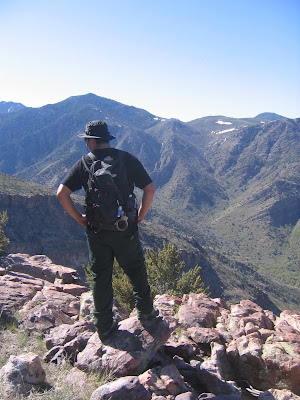 There was a lot of reflection going on that day. I was not the only one that had a connection to the friend that lost his life. It was a day for some to tell stories of the man he was, and the lessons he taught... still for others it was an introduction to a brave and seasoned firefighter that lost his life. It is my hope that lessons were learned by all on this day, by making the trip to the Devils Den fatality site and telling the story of the battle that took place on this ground. 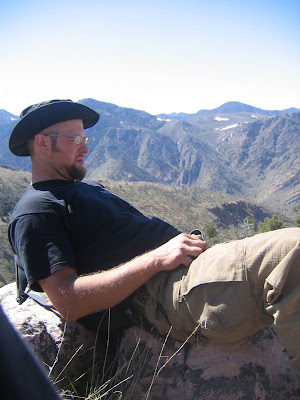 Spencer lost his life on August 17th in 2006, on the Devils Den fire in Central Utah. I have learned many lessons from this fatality fire. Perhaps one may argue that the lessons were 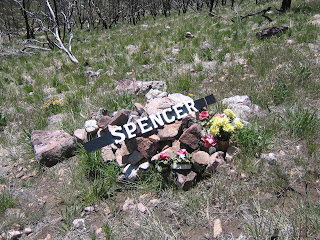 learned for me, due to my close ties to Spencer. I suppose that there is truth in that... I found myself reflecting back on the times that I had done what Spencer did that day. I am saddened to say that it took the loss of a good friend for me to realize that those stories of lost firefighters were not so distant... and the possibility of me making similar mistakes was real! I don't take that for granted any longer... and if there was a true lesson to be learned from me, it is that we are all a part of this family! I don't have to know the person on a level like I did Spencer, in order for the lesson to be validated. I am looking back on lessons learned from other fatality fires with a new understanding of just how close those people were to me... and just how easily those individuals could have been me!
In the end it was a great day... despite some somber moments, the crew enjoyed the day. Smiles still remained at the end of the day... and now the crew had something to bind them together, an experience that only they shared with one another. Just as I write about it now, there is a feeling that I can't put into words what any of us felt as we visited that site together. 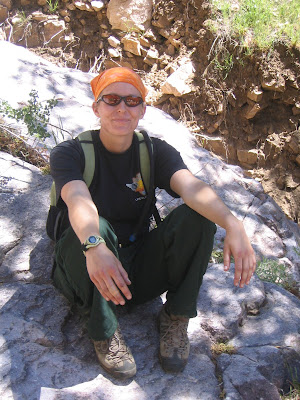 I spent some time at the end of the season talking with each of my crewmembers. I asked them about the things that went well, and the things that needed improvement... as most supervisors do. I also wanted to know about what was memorable for them, and for most... it was the time spent at the beginning of the season on the hill at Devils Den. I expect that Zion Helitack will continue to start our seasons off with such trips to important battlegrounds where lessons were learned... are learned!
Never stop teaching... lives depend on it! There is a moment for teaching in everything we do... and though the crew may roll their eyes and say,"here he goes again", I know that they appreciate the lessons from the past and the time spent teaching them. So be a teacher... share what you know... and maybe someday, we'll stop repeating the mistakes made and avoid taking the paths that lead to undesirable endings.
Cheers,
Posted by M.L.

Mike, You are such an amazing boss! You are a great blogger too! You always say things in just the right way that it really hits the reader! Thanks for all that you have done and do for Ben, our family and really in the firefighting world. We owe you!

Mandi - I am humbled by your comment! Thank You! I think that a leader (boss) can only rise to the levels that his crew will raise him/her too... I owe a lot to my crew, and Ben is a very integral part of that... I'm happy to have him on the crew, I learn daily from him... Thanks again, and welcome to the Zion Helitack Family!