Mill Flat was one of those fires... It started mid season and spent the better part of a month creeping around the wilderness of the Pine Valley Mountains. For the most part doing some good for the resource... This fire ended in controversy and pain! We do not pretend to understand nor do we pass judgement on the decisions made concerning the management of this fire. Our job is to be available to support those decisions made... early on the decision was made that this naturally occuring fire would be left to its own agenda in the wilderness. Mother Nature was in control, and fire managers took a sideline seat to monitor and observe what she had in store...

This was the unfortunate result... a fire that quickly spread downhill out of the wilderness and into the town of New Harmony. Again, we do not wish to question or second guess what decisions were made... we want to focus on the role we took once the fire became unruley. 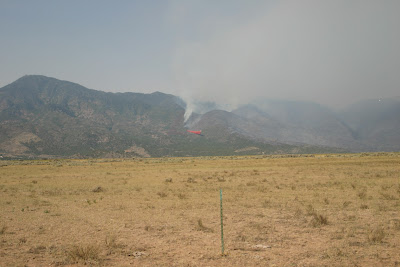 The picture above is of a retardent drop from a heavy air-tanker... this photo was taken the morning after the big push into town. New Harmony was not out of the woods... a lot of damage had been at this point but the threat of further damage was still very real. At this point a Type I incident management team had been ordered and Zion Helitack was engaged in establishing a base of operations for the large amount of helicopters that were already on order. 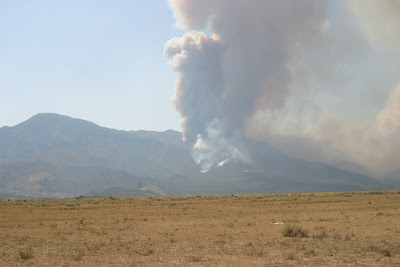 As you can see in this picture... the fire still had a lot of vegatation and topography that it was able to march across. It is difficult to see in this picture, so I will describe what was occuring. A wall of fire that was backing downslope, against the wind, allowing for dramatic uphill runs! 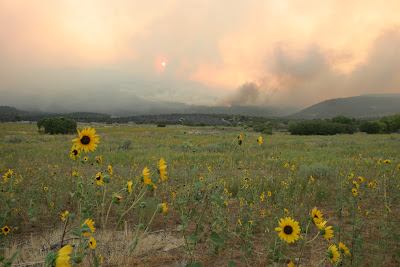 New Harmony was definately on the edge of the continued threat... several homes had already been lost, and many more homeowners were still nervous about the coming hours and days. The tension in town was thick! Many people had (and still do) emotional opinions concerning the decisions made about this fire, and the continued efforts of the fire fighters on the ground. We did our best to be understanding of the situation they were in, while trying to focus on the job we must do... The above picture was taken from town, and shows just how close the fire was and the altered veiw of the landscape that most will live with for many years. 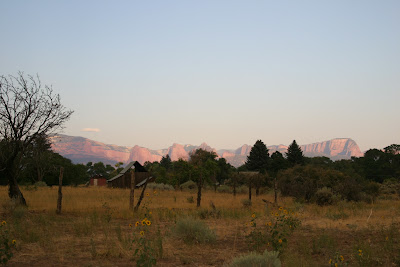 On a positive note... a look to the East still holds a dramatic veiw of Kolob! It reminded us of the extreme oposites that Mother Nature can be... The gorgeous vista compared to the destructive power of a wildfire. 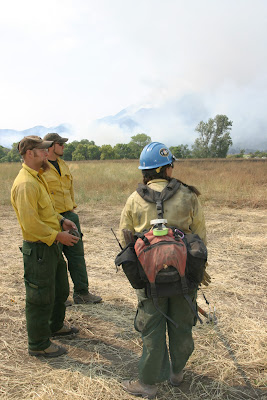 Back to our role... above, a picture of Zion Helitack crewmembers discussing the fire and their current roles. Hamm had been given the opportunity to work on the Color Country handcrew. She found us setting up a heliwell along her division and took the time to chat with Thayer and Damron about the events of the night prior. 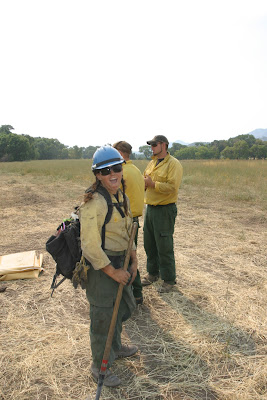 She was obviously having a good time... it is always good to have a change of pace. We all love what we do on Zion Helitack... however, getting the chance to play a different role in fire is a welcome change... and Hamm was soaking up every minute of it! 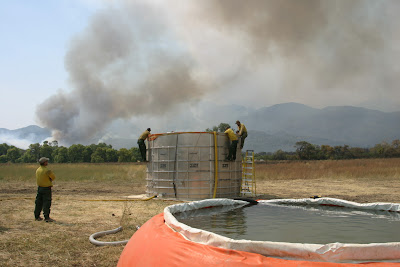 Initially a 6000 gallon pumpkin (foreground) was established for the engines that were engaged in structure protection. We were asked to switch gears and establish a water source for the large helicopter show that had already engaged the fire. So we set up this 15,000 gallon Heliwell (transported to us from McCall Idaho)... 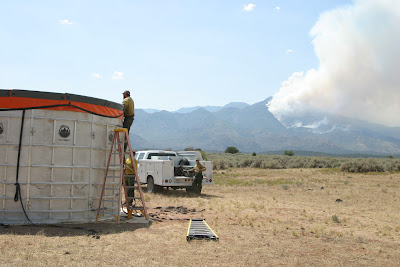 We had set up two Heliwells, both 15,000 gallon! This one was established a little further away from the fire in the foreseeable chance that the fire would smoke in the other water sources. We did a lot of work to ensure that the air show would not be slowed due to a lack of water. These large Heliwells are a monster to put together... but they are so valuable when you have large heavy helicopters looking for water. This one was brought to us from Richfield Utah.
We spent a lot of time supporting the Mill Flat fire... from initial recons when it was still considered a fire doing good for the wilderness to establishing multiple helibases to run the large air show that would fight the fire out of control to the transport of weather stations up the hill that will monitor rain fall and the potential for flooding... it was a long duration fire! A lot of lessons were learned from this fire... some of which were very upsetting to the community and the local land managers... the most important lesson, which seems to be one that is learned over and over again, is that Mother Nature is difficult to predict and even harder to control!
cheers,
Posted by M.L.