There are many crews that have added valuable tools (skills) to supplement their capabilities as a helitack crew. Two tools that often carry a lot of hype are Rappel and Short-haul. Rappel is of course what you would imagine. It typically involves two rappelers and a spotter working out of a helicopter allowing for access to terrain and vegatation that would be difficult to land in. 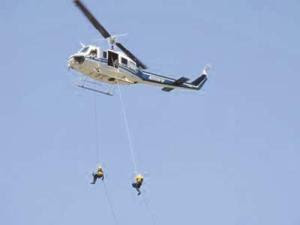 Rappelers can decend from the helicopter at great speed from varying heights up to 250 feet above the ground. It takes a skilled pilot, and a lot of training for the crew to obtain this skill and remain proficient in its use. Many agencies within land management have excercised this practice. It is utilized primarily by firefighters that are looking to gain access to fires that are in very remote locations, typically wilderness.

Rappel requires that a pilot pull into a hover over a predetermined location. Upon inspection of the location, a spotter will drop ropes out of either side of the helicopter. Once the ropes have reached the ground and following a series of checks, the spotter will tell the rappelers to go to the skids. Once each rappeler has taken his/her position on the skids and all looks good to the spotter... the word is given to rappel. Both rappelers will then negotiate their way off of the skids and into a free slide rappel. Rappeling has an inherent risk associated with it... there are a lot of checks and training that takes place to ensure that no accidents occur, however despite every effort there is the occasional injury associated with rappeling. Until recently those injuries have typically been minor in nature, however this last year the first recorded death associated with rappeling occured. 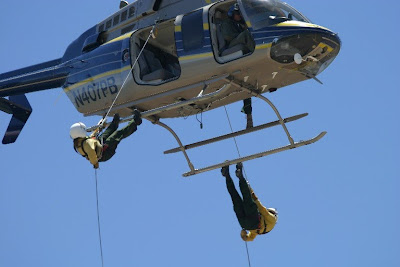 Short-haul is a practice that is primarily exercised by the National Park Service, and some state agencies. It has been utilized almost exclusively for Search and Rescue activities. The practice of Short-haul requires incredible skills by the pilot and a well trained group of individuals to perform the Short-haul. In Short-haul individual technitions are connected to the bottom of a long line and lifted from one location to be delivered to another location. It is primarily a life saving activity used for extracting injured individuals that require medical attention. 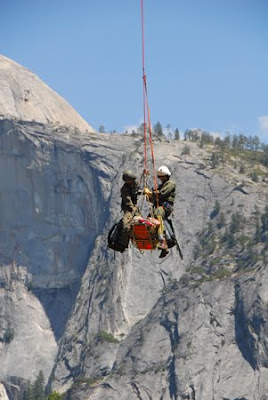 The practice of Short-haul is fairly well regulated, and requires the right skilled people with a very skilled pilot. There are no reported accidents or injuries using NPS helicopters to do Short-haul. Many years ago, there was a death during a Short-haul evolution when a military aircraft performed a similar style of extraction and inadvertantly drug a patient through the trees... killing the individual. So it is conservative to say that Short-haul is also a risky tool that we utilize. 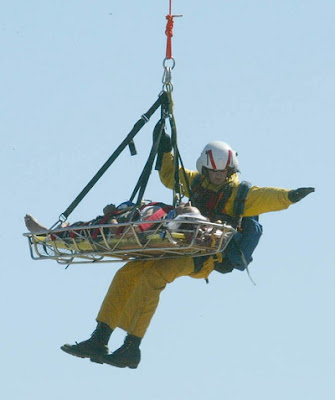 So this is the question that has come up recently... could Short-haul be utilized as a tool to insert firefighters the same as rappel. Are the risks greater than that of rappel? Could risk be mitigated if a crew was not utilizing both tools (i.e. rappel to insert firefighters, short-haul to rescue victims)? Recently Short-haul has been approved to insert law enforcement into locations for the seizing of marijuana plantations, could the same tool then be utilized for firefighters?
We want to know what you think about this topic... on the right there is a survey that asks the question, feel free to give your opinion by answering that survey. However, I would suggest that you add a comment (whether you want to be annonymous or not) by clicking on the comment box at the bottom of this post... give us your two cents about the topic... particularly, do you think it is a viable alternative to rappel... and if so or if not, why?
waiting to publish your comments,

I definitely think short-haul is a viable option, and one advantage is short-haul can be a two way ride. Rappel requires a packout or a helispot to be improved, which can be a sensitive issue in Wilderness. Pilot skill is becoming more of an issue, I have worked with only a couple pilots in 21 years that I would be comfortable short-hauling under.

The Question: Should Short-haul be allowed for insertion of wildland firefighters, as an alternative to rappel?

So there you have it... the majority of our readers whom have commented on this poll feel that Short-haul is an option for insertion of firefighters. I'll keep everyone updated... perhaps this is something that we will persue following our approval for Short-haul.

There are many issues to consider like response times, determining which tool is better suited for the job, experience levels, complexity of incident, exposure times, and obviously, safety. The problem is that people don't truly understand the meaning of shorthaul. It is not the 1st tool or the last tool out of the bag, it is determined by the TOTALITY of the circumstances. I see a major problem with using shorthaul as a firefighting tool. There are some positives with it, however, I truly believe it will be over-used and not in the original format that was supposed to be, meaning, I think crews will start inserting firefighters for long distances and not just a "shorthaul." This scares me due to the exponentially increased exposure risk. If it's used as intended with mitigated exposure times, then it greatly increases the response times before personnel are on the fire line(ie- landing and rigging the line at a helispot, performing a powercheck, buddy checks, spotter checks, and several other manitory steps). Then obviously rappel is a safer and more effiencent option with less take-off and lands (if doors can be slide back or are off), less exposure time for the firefighters, ect. I don't know how many of those people that took the survey really know all the factors and that concerns me. As a person that has operational rappels and been at the end of the line for a couple of operational shorthauls, I am frustrated by people that have no experience with these systems and tools. Like the 1st comment, it's not going to be a "2way ride!" Unless it is an emergency, it would be an insertion and no extration. An extration would greatly increase the risk and exposure. Thats is stupid. Once they were inserted, it would be a hike out or helispot, just like a rapppel, unless like I mentioned above, it was a true emergency. But even then, it still probably quicker and easier to hike out to a safe area.

Please understand people it is a great tool, if thought through, however, I see more than ever, that it is usually not and it is disappointing.

The whole rappel vs shorthaul issue is a can of worms with way too many factors not being addressed. The first and very important issue is which platform (helicopter) would be the "best" and safest for these missions. By far the better aircraft would be the Bell medium for its unprecedented safety history and the large pax cabin. The "restricted" UH-1's unfortunately have been overlooked due to non aviation government personnel making decisions that they are not qualified to make. If we look at the history of how many men were deployed by this aircraft in the past there can be no doubt as to the aircrafts record. Wake up USFS and start using these fantastic helicopters like the states do.