Finally... it has been a long time coming. Today we were informed that the contract solicitation for Zion N.P.'s exclusive use helicopter, has been awarded.
Congratulations to Hillsboro Aviation. They will be returning to Cedar City Utah for the 2010 season. This time bringing with them a Bell 407 instead of the L-4. 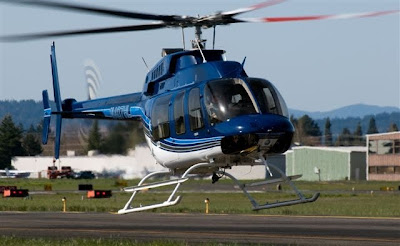 The new aircraft, less than 100 hrs of flight on it, was delivered to Hillsboro at the end of 2009. The above picture shows our primary pilot, Nicole Ludwig, at the controls of this beautiful machine (N407HL). 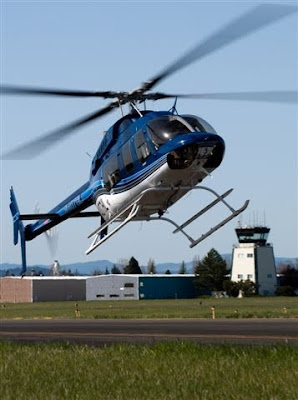 This picture shows the 407 doing some training work, full down collective. With this new aircraft comes a brand new fuel vehicle as well. The 800 gallon Dodge truck will be a welcome addition to the contract. This year Hillsboro will also provide us with a mechanic, per contract requirement. It will be good to have a mechanic/driver with us each day to watch over the maintenance of the helicopter.

4 years ago we broke in, what was a near new aircraft... we are once again going to have the pleasure of breaking in an even newer aircraft. So for the crewmembers who will be joining our team this year... start wrapping your mind around the new call sign "seven-hotel-lima". This may be a difficult task for several of us who have been used to the look (which hasn't changed much) and call sign of our previous aircraft (420RL). I personally feel that "seven-hotel-lima" rolls off the tongue a little smoother.

Congrats to Hillsboro Aviation... we look forward to teaming up with you for another contract period!

Sweet looking ship. The Bell 407 is a nice ride and works great with a belly tank and/or crew insertion at higher elevation helispots.

It would be a great platform for both rappel and short haul operations.