The Mill Flat Fire - Discovered on July 25th, it was determined that the fire in the Pine Valley mountains above New Harmony was a good candidate for a "resource benefit" managed event. On August 29th, over a month later, the Mill Flat fire experienced a rapid growth event and descended out of the Pine Mountain Wilderness into the town of New Harmony. August 31st, 2009 a Type 1 Incident Management Team (Muir) transitioned with local management to engage, coral, and extinguish the resource benefit fire that had become a nightmare for local residents in Southern Utah's town of New Harmony. 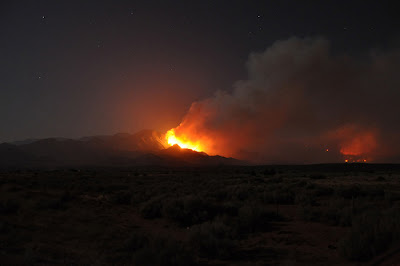 For a month, residents of New Harmony and Firefighters alike had watched with anticipation and anxiety as the Mill Flat Fire grew in strength. Initially the fire was located in an area where the re-introduction of aspen would have been beneficial to the forest. The introduction of the aspen required a disturbance event much like a fire, and in the early days of the Mill Flat Fire it looked as though "Mother Nature" had chosen the time and place to ensure regeneration of the aspen within the Pine Mountain Wilderness. Something that local land managers were in support of. Everything looked good for about a month... but due to the growth of the fire and change in conditions, the fire was heading for an event that no one anticipated and everyone feared. 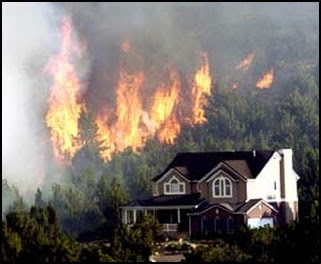 When the uncontrolled Wildland Fire, called the Mill Flat, came down off the mountainside it did so with a fury unmatched. It burned long into the evening, well beyond the hours of operation for the aerial assault that was taking place earlier in the day. It felt as though the efforts that the helicopters and air-tankers had made earlier in the day were fruitless. In fact the aviation show had been shut down earlier than nightfall due to the intense winds that were driving the raging inferno. As the town was evacuated, firefighter retreated to a fallback position. Structures had been evaluated for structure protection previously in preparing for worst event scenario, and now as that fell upon the firefighters in the ash of a raging wildfire it was evident that the actions to be taken would be heroic if they were to save every structure. They battled through the night, and in the morning it was reported that several structures had been lost. It wasn't for the lack of effort from the firefighters on the line, as they had engaged the fire toe to toe. In the end despite every effort made by the firefighters, the rage of the inferno and the lack of preparation on the part of some residents made for a losing battle. 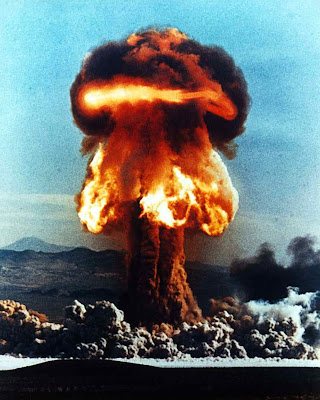 As we prepared for the incoming type 1 management team, we spoke with many of the residents located within the area of destruction. In their minds the result of the fire might as well have been a Nuclear Explosion. The land in and around structures standing and destroyed, looked like devastation. It was a difficult fire to extinguish... and the efforts of the firefighters that were on the line should be commended by all.

So the question remains... why didn't local managers take action to engage the fire, earlier in its growth? The answer to this question may not be black and white. In many ways the answer is subjective at best. In our careers as firefighters we understand one thing better than most, "hindsight is 20/20"! So rather than point fingers, or issue judgement we wish to share with you the final report issued just last month. Take a moment to read it, and in your own subjective manner you can feel free to render your own judgement. In so doing, please understand... there is a distinction between decision that are made on a national, regional, and local level by managers and policy makers from those that are engaged in exercising action based on those decisions. Basically, don't disregard the efforts that those young men and women firefighters took to engage this wildland fire. They are heroic actions that put their lives in jeopardy! So be critical of decisions that were made by all levels of management, however don't be judgemental of the firefighters that did their best when the opportunity to fight the fire was given to them.

Here is the link to the final report...

Thanks for sharing your experiences here on your blog --- I enjoyed this post, and I'm looking forward to more.