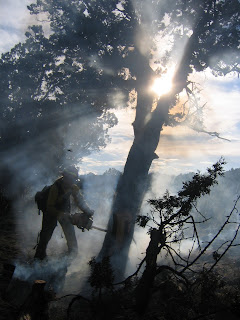 Color Country Fire is about as varied as it comes... Over the years Zion Helitack has spent time on single tree fires like the blackfoot fire of 2005. This fire was a lightning start during our monsoon season. The monsoons typically strike in late August and last into September. Now don't quote me on that... mother nature has a mind of her own, and we have seen some strange weather patterns in SouthWest Utah. Fires like the Blackfoot fire are typically taken care of in a matter of several hours, with a small 2 person initial attack 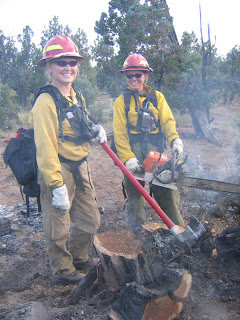 squad. It is standard with fires like these to basically put them out completely before leaving... making certain that the fire will not escape or grow. They will then be checked a day or two later to call them out. Unlike big timber fires where crews camp out for 24 hours beyond the last smoke to be able to call the fire out, never to visit the site again... our fires are often left unnattended in a safe, calculated manner... this allows the fire crew to bounce to the next start and assist in putting it out. This is really important as it is not out of the ordinary to have dozens if not hundreds of starts due to one lightning storm sweeping through Color Country. 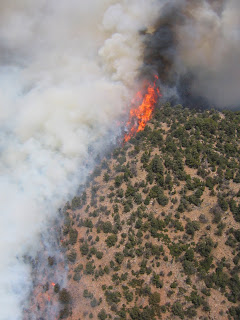 The small fires are where Zion Helitack shines... typically able to handle fires from a single tree to about an acre without the support of other crews. Beyond an acre (and depending on the complexity even under an acre) the helitack crew often falls into a support role. Providing supervision, Incident Command, arial observation, squads to support handcrews or engines, and logistical needs... and of course bucket support from the helicopter. This happens with at least half of the fires that Zion Helitack has responded to in the past several years. Like the Baboon Fire of 2006. As the pictures here show, the fire was in sage and cheat grass with the occassional pinion/juniper. It was a fast moving fire that threatened a 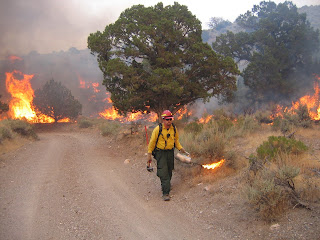 communications site and the natural gas pipeline... strategy with this fire was to back off to a defendable area and burn out. We picked the pipeline road and with the support of several engines and the fuels crew out of Cedar City, we started a fast moving burnout which stopped the fire at the pipelines edge. It was the first hour or two of initial attack that we do this job for... adrenaline pumping and torch in hand we set out to strategically beat the monster that is fire. We don't always win... but this day was a good day! 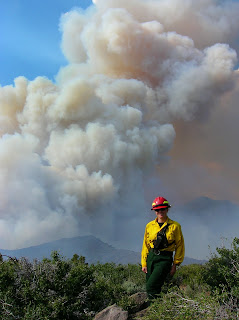 Some fires get way too big for us to do anything other than back off and set up a logistical support for those on the fireline. This is the part of Helitack that most people make jokes about, and frankly it is when the Helitack crew is most observable. We tend to go... go... go... and when all is ready we sit! In my opinion this is some of the most frustrating time for Helitackers... we are often miles away from the fire watching it crank into the sky, wishing we were on that engine or supporting the handcrews that are battling the blaze. I would imagine every Helicopter Crewmember asked would say there is a level of anxiety that accompanies sitting at the Helibase. Color Country is prime territory for large fast moving fires... we spend a good 25% of our time 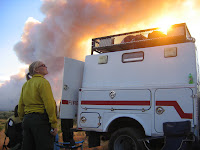 supporting large fires in Color Country. It is not what we are best suited for, but it is essential that we are efficient at offering the logistical support needed. It is managements policy to leave only the bare minimum number of crewmembers at the Helibase, whenever possible sending the majority of the crew to the line to support the suppression efforts.

Fire couldn't be much better than it is in Color Country. That is not to say we don't lack in certain types of fuels and fires that are also very fun (i.e. big timber fires are not the norm, however do happen occasionally). Our elevation of concern ranges from approximately 1,500' up to 10,000'. Most fires happening in the 3,000' to 7,000' range.... this puts our primary vegatation of concern in the high desert... cheat grass, sagebrush, pinion/juniper, mahogany, oak brush, manzineta, etc... fast moving fires that are typically controlled within 24 - 48 hours....

Until the next one, Cheers.
Posted by M.L.