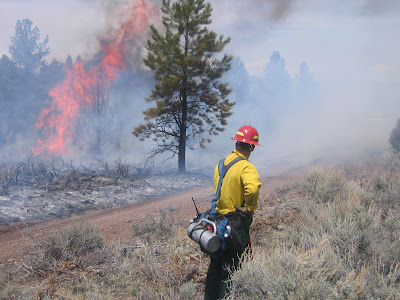 We were invited to assist the Forest Service in accomplishing some more acres on the Cooper RX, which has been an ongoing prescribed burn plan for many seasons now. On the day we went out, there weren't a lot of resources available. Two heavy engines off the Dixie N.F., several members from the Cedar City Shot crew, some miscellaneous overhead, and myself and the two leads off of Zion Helitack. 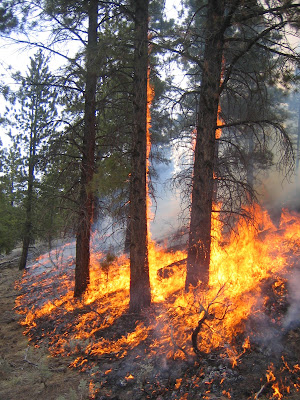 We accomplished approximately 30 acres. It was a slow go burn... the idea being that we wanted to get rid of the ground litter and dead debris, take out most of the sage brush, however leave the Ponderosa and other trees in place. We had to take it slow... as you can see from the pictures, even taking it slow wasn't enough to avoid the occasional tree torching out. 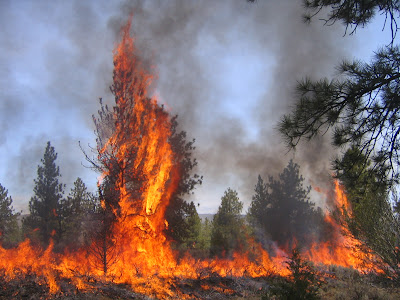 Overall it was a successful day... with relatively few resources we accomplished a decent number of acres, given the terrain and fuel type we were dealing with. We enjoyed getting back into the swing of things... Helitack spent the day on torches lighting, and occasionally helping to hold what fire we had on the ground. 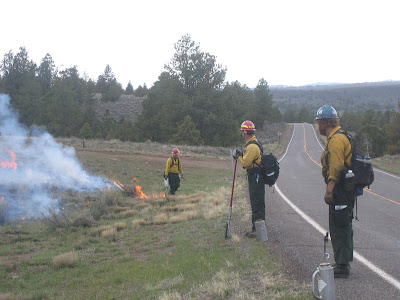 At the end of the day we were tired... smelled like smoke... and were anxious for the fire season to begin.

Since the burn (May 4th), most of the crew has come on. We have spent the last 3 days pounding out the miles in P.T. I am sure I speak for most of the crew when I say there are some sore muscles and plenty of blisters, and everyone will be glad to see the 1st week of train-up behind them as we head into the weekend.

Only one crewmember still remains to join up with us... She will be here on Monday! That will complete all of the crewmembers that are returning this season. I hope that this Cooper Knoll RX is a good sign of the type of fire season we have ahead of ourselves...

OOOOO looks like fun! I'm jealous! I wish I was on the crew this summer instead of in school.