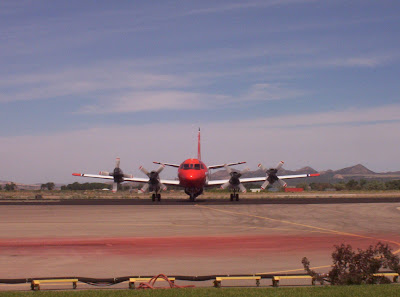 Zion Helitack occupies space at the Cedar City Air Center, home to one of the busiest air tanker bases in the nation... In fact 2006 had the retardant guys pumping nearly 2 million gallons of retardant! At one time the Tanker Base was called home by 9 of the heavy air tankers that fight wildland fire, at the time this was over half of the fleet. 2006 was the best year on record for the base... in fact no other base in the country was as busy or pumped as much retardant
P2V
looking under its wing at the waiting fleet 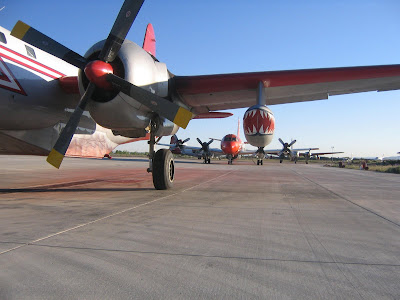 These monster aircraft were originally built during WWII, and performed duties for the Navy and Air Force as submarine finders. They have been retrofitted to drop retardant on fast moving wildfires. Widely known as one of the most dangerous jobs in the world, tanker pilots manuever these large aircraft to very low levels to release their heavy loads on the fires they fight. 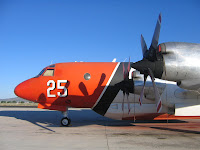 The P-3 Orion is a 4 prop turbine that carries nearly 2500 gallons of retardant. It has a very sophisticated computer system on board that can open a series of doors on the bottom of the aircraft. This allows them to split loads into multiple drops. Or if desired they can stretch the length of a drop out further. It takes the guys at the tanker base approximately 10 minutes to park, load, and release the P3-Orion... Now thats fast! 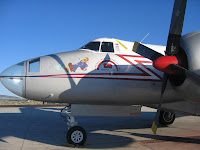 The P2V is a twin prop reciprocating engine with dual jet assists. These engines are big and powerful, and nearly unchanged since their days of flying over the ocean in WWII... They are not jet turbines... however the P2V has two small jet engines mounted one on each wing. The jets help this airplane to get off the ground with a full load of retardant (appx 2000 gallons), and are again used to assist while the airplane is preparing for and pulling out of the drop. The P2V has a very distinct whine when it idles into the tanker base parking... like the call of a warrior coming home. I don't know about you, but just once I would like a ride in the nose cone during a drop... just once! 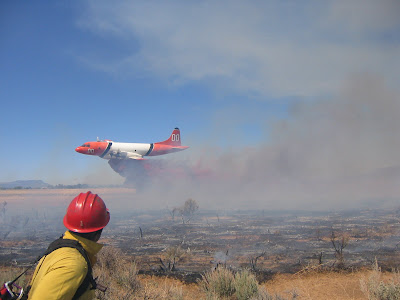 When the base is busy during the summer it is evidence of a war... When the Heavy Tankers roll in, we know that smoke is in the air... fire is on the ground... and a war is about to be waged between these heavy metal machines and their nemesis.... FIRE!