How do we keep busy while not on fire?

Unlike engines that load up in the truck and head out to do project work, or hotshots that are constantly in travel status to the next big one... Helitack crews are strapped to a rather large piece of expensive equipment, that doesn't allow for getting off the base. So in order to not go crazy... waiting for the fire bell to ring, driving our adrenaline to attention,... Helitack finds things to do! 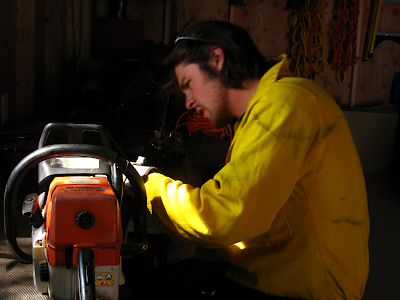 The supervisor like to see crewmembers making certain that all the gear is ready to go. Brennecke is checking the edge on the saw chain, to ensure it will cut to his liking... this is a fairly common activity. But when you have checked everything over... well then you have to move on to the next activity 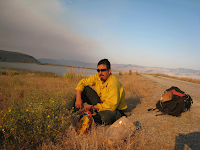 Yeah... we do some sitting around. Management always seems to keep busy doing something that keeps them from just chillin' and enjoying good conversation. However, as crewmembers on Helitack there is a fair amount of waiting that takes place. It is good when the crew isn't sick of one another and actually enjoys "hangin'" 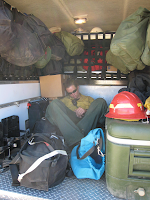 After spending about as much time as we like with one another... perhaps a little siesta is in order. As Iceman likes to call it a "natural" is often just what you need in order to pass time. However, unless you have been running strong for day after day on Initial Attack, there just isn't much need for a lengthy nap.


Soooo... perhaps a good game of horse-shoes. Competition is usually light hearted, that is until management gets involved. It doesn't happen on a daily basis, not even on a weekly basis, but when management decides to get their game on the competition is fierce. A good game between Reid and Iceman is always good for drawing a crowd of spectators. It's a good way to wind down after a long day of standby... 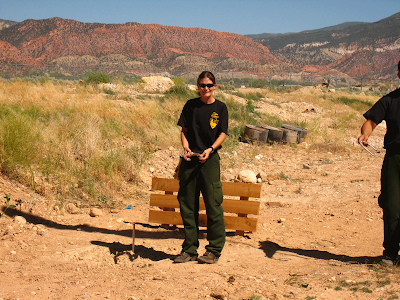 In the end... we all signed on to fight fire! We would give up our day of keeping busy, for a fire call that takes us to the field. Most of the crew would much rather be up on the hill fighting fire than sitting at the helibase. This is probably the biggest misconception about Helitack, (at least Zion Helitack)... Most think or joke that it is all about L.C.E.S. for us, "Locate Cooler Establish Shade"... truth is, the days are longer and less rewarding when we are not out on the fire line... Any one of us would trade places with someone on the fire, any day of the week!

Well, keep busy... and we'll see you on the fire!
Cheers
Posted by M.L.

Thanks Kate for donating these pictures for the good of the blog... I'm sure that more pictures taken by Kate will be posted in the future! Stay tuned...