We knew that there was a visitor to the trailer that year. The evidence left behind by his destruction seemed overwhelming. However, it wasn't until one afternoon when R.C. Martin (care of Yellowston Helitack on detail) was taking a "natural"... a natural as Ice likes to call them is the afternoon nap required by those of us whom are a little older and have lost a bit of our spunk... that the visitor was trapped and caught due to his own stupidity. The noise was coming from a nearby garbage can, and upon inspection of the small but annoying sound, R.C. discovered the MOUSE! 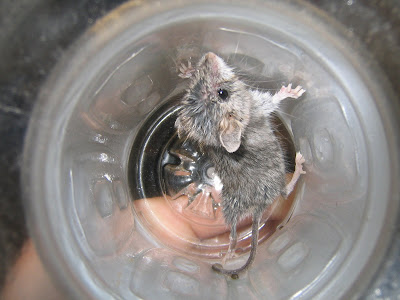 To some he was considered cute... but most of us realized the foul trail of destruction he had left in his little wake... Once again however, democracy found a place on the crew and for those that didn't want to see the demise that was surely looming over this mouses head... for those crewmembers, R.C. suggested a trial! 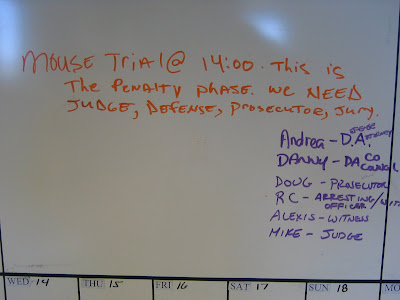 And so it began at 1400 on that summer day... a trial to decide whether the mouse, now named defendant, would lose his life for the crimes he had committed. Of course we made the crewmember that could not stand to see this happen, the Defense Attorney. It was up to Andrea to come up with an argument that would prove reasonable doubt... Others were all to quick to jump in and fill role of Prosecution. I am certain to this day that Doug just wanted to see that mouse die!!! And thus the trial began... 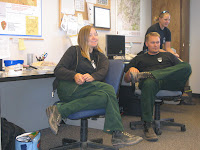 The Defense had a strong case... made even stronger by the weak showing of the prossecution.. and despite the obvious bias of the Judge (thats me), It was found that the mouse was not guilty by reason of obvious relatives within the trailer. My hands were tied, there was nothing more I could do but rule on the matter 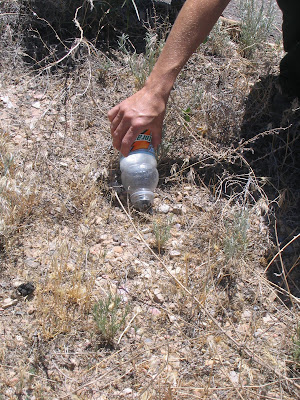 The law around the Air Center was changed forevor on that day... as I am sure that the once named defendant, now free mouse... quickly returned to the shelter of the trailer to continue raising destruction with his little family of illegal occupants... So, as "Judge" and more importantly "Helitack Supervisor" I changed the law! 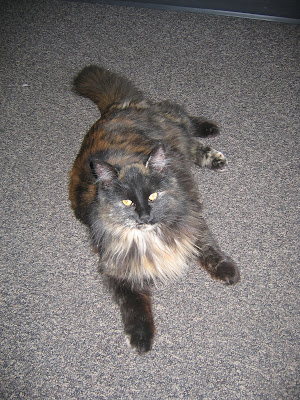 Have you met Soldier yet... well let me introduce you to the new law around the Air Center. Soldier was quickly recruited by myself, from a box outside Walmart in downtown Cedar City. She is a Mercenary! She now holds title of "Judge", "Jury", and "Executioner"! She calls the trailer home... and no stinking family of illegal occupants are going to bother her... she put an end to my headaches

Update: Once Soldier ran out of mice to trap, play with, and kill... she was on to whatever she could get her claws on. We started noticing lizards without tails, and tails without lizards... however this past summer it escalated to a more sporting apponent, birds. After the crew had cleaned up the 5th or 6th bird killing in the trailer (which is a major mess, blood and feathers everywhere) we decided that the trailer was no longer Soldiers home... she now lives outdoors like she was always meant too. That is until John Burke joined us at the Air Center... most days now, I see Soldier sitting in John's office. It looks like once again Soldier has gotten her way!